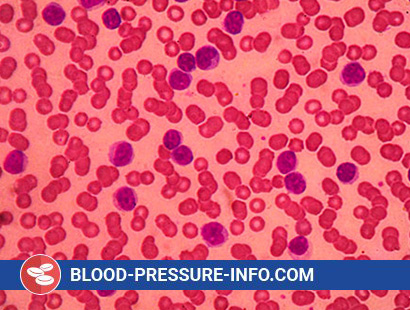 In the compensated stage of the disease with a typical variant of chronic lymphoid leukemia, patients are given general recommendations for observing the regime of work and rest, nutrition and establish dynamic monitoring for them. The first signs of the progression of leukemia, manifested by intoxication (increased sweating, fatigue), an increase in the number of leukocytes, an increase in the size of the lymph nodes, liver, spleen, require more active therapeutic tactics.

During the period of cytostatic treatment, systematic monitoring of hemogram parameters is carried out (1-2 times a week). Treatment is stopped in a typical case, when the number of leukocytes is at least 20-40 * 109 / l (in order to avoid the development of agranulocytosis). Since cytostatic therapy is accompanied by a large cellular breakdown, drugs are prescribed that inhibit the synthesis of uric acid (allopurinol, milurite), and heavy drinking of alkaline mineral waters.

With a significant deterioration in erythro-, thrombocytopoiesis, the development of deep granulocytopenia, cytostatic treatment is canceled. According to the indications, red blood cells, platelets, leukoconcentrate, glucocorticoid hormones are used. With moderate drug cytopenia, they are limited to the appointment of glucocorticosteroid hormones, B vitamins, ascorbic acid. Complete hematologic remissions in chronic lymphoid leukemia are extremely rare.

Monochemotherapy. The most effective in the treatment of a typical variant of chronic lymphocytic leukemia are chlorobutin, cyclophosphay and lafencil.

Chlorbutin is taken in the morning in daily doses of 4-15 mg. Its total dose for the main course of treatment varies widely and amounts to 80-700 mg, which is due to the initial number of leukocytes, the rate of decrease in their number and individual sensitivity to the drug. With leukocytosis 40-90 * 109 / l, chlorobutin is prescribed 10 mg 1-3 times a week; with a higher content of leukocytes, it is used daily or every other day, and with hyperleukocytosis (more than 300 10 / l), a single dose can sometimes be increased to 15 mg. The decrease in the number of leukocytes usually begins at the 2-3rd week of treatment, with a decrease to 20-30 * 109 / l, the drug is canceled and it is prescribed again with an increase in leukocytosis, the size of the lymph nodes. To maintain the achieved effect, chlorobutin is taken 1-2 times a week in a daily dose of 5-10 mg, which keeps leukocytosis within 20-30 * 109 / l. The drug is used in outpatient practice as the main, supportive and “primary deterrent” treatment.

Cyclophosphamide is used for a significant increase in lymph nodes: the spleen and for the subleukemic number of leukocytes in the blood. Initial moderate anemia and thrombocytopenia are not a contraindication to the appointment of the drug. It is administered intravenously or intramuscularly at 400 mg daily or every other day, at least 600 mg every 2-3 days. The average dose is 8-14 g of the drug. After the completion of the main course of treatment, cyclophosphamide can be used as a maintenance agent: 2 times a week, 200-400 ml parenterally (less often inside). Side effects are possible: dyspepsia, dizziness, blurred vision, dysuria, hematuria, hair loss.

Pafencil is prescribed for high leukocytosis (leukocytes 200 * 109 / l or more), a significant increase in the size of lymphoid organs in a single dose of 25-75 mg (daily or 1-3 days), the total course dose of 500-1200 mg, cytopenia may develop later 7-15 days after discontinuation of the drug. Reception is stopped with a white blood cell count of 40-60 * 109 / l / l and hematological control is carried out for 2 weeks.

Prospidine is administered intravenously or intramuscularly at 50-75 mg, with good tolerance, increasing the daily dose to 100-150 mg. The course dose is 2-3.5 mg. A good effect is observed with a combination of prospidin with prednisone.

Spirobromine. Its cytopenic effect is small. The drug is administered in a single dose of 500-800 mg intravenously for 10-12 days. With a specific lesion of the intrathoracic lymph nodes, very rarely pleura, spirobromine can be administered intrapleurally after evacuation of exudate in a dose of 500-1000 mg. Prospidine and spirobromine have a positive effect on specific skin lesions.

Polychemotherapy, including cytotoxic drugs with a different mechanism of action, is used in the treatment of patients with tumor, pro-lymphocytic variants of chronic lymphoid leukemia, with tumor progression of the process, Richter’s syndrome, very rarely developing blast crisis. More often, a combination of alkylating agents with drugs that block cell mitosis is used.
The use of a regimen including cyclophosphamide (800 mg once a week or 400 mg every other day) and vincristine (2 mg once a week) for 3-5 weeks causes a noticeable reduction in the size of the lymph nodes, liver, and spleen.

Positive results in the treatment of patients with a tumor variant of chronic lymphoid leukemia can be achieved with the use of the CPP regimen: cyclophosphamide 200-400 mg each (based on 3.5-4 mg / kg daily or every other day, papencil 25-50 mg daily or every other day , prednisone at 40 mg / m daily). Treatment is carried out for 2-4 weeks; cycles can be repeated after 2-4 weeks, depending on the clinical picture of the disease.

In the treatment of patients with a tumor variant of chronic lymphoid leukemia or in the period of tumor progression of the disease, other chemotherapy regimens used in the treatment of lymphosarcoma (adriablastin + CVP; rubomycin + CVP, etc.) can be used. However, single and total doses of drugs are usually reduced by 1/3 and the intervals between cycles are 3-4 weeks, and the total number of cycles is less than with lymphosarcomas. When fluid appears in the pleural cavity due to damage to the pleura or intrathoracic lymph nodes (lymphoid elements predominate in the exudate), cyclophosphamide (spirobromine) can be administered intrapleurally after fluid evacuation.

Radiation therapy is prescribed for CLL variants occurring with a predominant significant increase in certain groups of lymph nodes and / or spleen. Perhaps the use of radiation therapy and with generalized hyperplasia of the lymph nodes. It is used mainly in the form of remote gamma-therapy, however, classical kilovolt X-ray therapy has not lost its significance even now. Radiation treatment is combined in some cases with the use of glucocorticoid hormones, transfusion of blood components. Better and more stable results of local exposure can be achieved in patients with a predominant increase in the spleen and certain groups of lymph nodes with the subleukemic variant.

Splenectomy is indicated for autoimmune conflicts that are not amenable to drug treatment, for splenomegaly, which is not inferior to radiation, drug therapy and creates the phenomena of abdominal discomfort or for frequent spleen heart attacks; with variants of the disease occurring with predominant splenomegaly and subleukemic leukocytosis; with hairy cell leukemia, characterized by splenomegaly, deep erythro-, thrombo- and granulocytopenia.

Therapeutic lymphocytapheresis is the method of choice, it is used for hyperleukocytosis of more than 200 * 109 / l, anemia, thrombocytopenia that impede the conduct of cytostatic therapy, or with the development of resistance to the latter. Cytapheresis is carried out on blood cell separators or by intermittent centrifugation using plastic equipment.

Glucocorticosteroid hormones. An absolute indication for their prescription is an autoimmune conflict that developed against the background of chronic lymphoid leukemia (autoimmune hemolytic anemia and thrombocytopenia). The best effect is the administration of prednisolone in a daily dose of at least 80 mg, sometimes it has to be increased to 100-300-500 mg or more. In cases of severe autoimmune conflict, adrenal insufficiency, and the inability to use hormones per os, intravenous administration of glucocorticoid hormones (hydrocortisone, prednisone, urbazone) in large doses is justified. In the absence of effect from
hormones, it is advisable to prescribe other immunosuppressants (6-mercaptopurine, azathioprine), splenectomy may be recommended.

The use of glucocorticoid hormones is also justified for the subleukemic variant of the disease, which occurs with a significant increase in the lymph nodes, liver, spleen, when it is impossible to realize only radiation or chemotherapy with resistance to them; with cytopenia of cytostatic genesis, hemorrhagic thrombocytopenic syndrome associated with non-immune thrombocytopenia.

Anabolic steroid hormones (methyltestosterone, its synthetic derivatives – methandrostenolone, retabolil, etc.) are indicated in connection with the catabolic action of glucocorticoid hormones; they are prescribed for persistent anemia due to insufficiency of erythropoiesis, which is not amenable to anti-anemic therapy, for bones due to both the underlying disease and the osteolytic effect of glucocorticoid hormones, in the terminal stage of the disease with exhaustion, hypoproteinemia, and steroid diabetes.

In the stage of clinical compensation, patients are not contraindicated staying in general sanatoriums, preferably in the middle lane. Resorts of the Black Sea coast can be recommended in the early spring and late autumn months. Physiotherapeutic procedures are prohibited (electrotherapy, mud, paraffin, etc.). In connection with reduced immunity, preventive vaccinations are contraindicated, about which the patient should be warned. The average life expectancy of patients is 3.5-6 years.