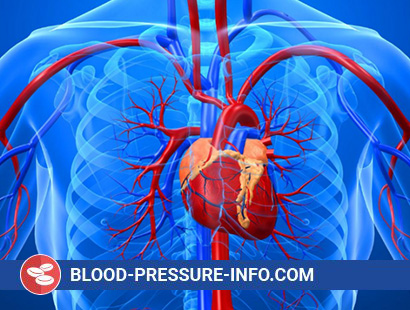 The walls of the aorta must withstand the slipping effect of each systolic tremor of blood. Having a large diameter, the aorta experiences a much greater stress than the other parts of the arterial system, since the wall tension directly depends on the diameter of the vessel and the pressure in it. For this reason, the effect of increased pressure on the aortic wall is particularly dangerous. In addition, the aorta is susceptible to infection, trauma, necrosis of the middle shell and, most importantly, arteriosclerosis, which is ahead of syphilis in the frequency of aortic lesions. The consequence of these effects are the main diseases of the aorta: aneurysm, stratification, arteriosclerotic occlusive lesion and aortitis. The number of deaths caused by aortic disease has not been accurately determined, since other cardiovascular diseases such as coronary heart disease, hypertension and cerebrovascular diseases usually accompany them and come to the fore when recording the cause of death.

Aneurysms. “True” aortic aneurysm is a pathological expansion of its lumen, affecting all the walls of the vessel wall. The main defect is the destruction of the elastic fibers of the middle shell, as a result of which the remaining fibrous tissue stretches and leads to an increase in the diameter of the vessel, which in turn causes the stress of its wall. As this process progresses and the lumen expands further, the likelihood of rupture increases. “False” aneurysms are usually formed as a result of trauma and represent such ruptures of the inner or middle wall of the wall, as a result of which the aortic segment widens, and the aneurysm wall consists only of the outer shell and / or perivascular clot.

The most common spindle-shaped aneurysm, characterized by diffuse expansion of a segment of the aorta. In this case, the entire circumference of the aorta is affected. Unlike this form, saccular aneurysm is an extension of only a part of the aortic circumference in the form of protrusion.

The most common cause of aneurysms is arteriosclerosis. Other causes include cystic necrosis of the middle shell, trauma and syphilis or other infections.

Ischemic arteriosclerotic heart disease, which affects more than 50% of patients with an aneurysm of the abdominal aorta, significantly worsens the prognosis of the disease. In one group of patients without clinical signs of coronary heart disease who had not undergone surgical treatment, the survival rate for 5 years of follow-up was 50%. In the presence of coronary heart disease, the survival rate for the same period was only 20%. Long-term follow-up of patients who did not undergo surgery for this disease showed that approximately 30% of them died as a result of rupture of an aneurysm, and 30% of a concomitant cardiovascular pathology.

With the right selection of patients, surgical intervention prolongs life expectancy, preventing aneurysm rupture. In the presence of symptoms of an aneurysm or signs of its progression, as well as an aneurysm with a diameter of more than 6 cm, emergency surgical intervention is indicated. Choose a treatment option for patients with aneurysms of medium diameter, from 4 to 6 cm, without clinical symptoms of the disease is much more difficult. Operational mortality in planned interventions conducted before the rupture of an aneurysm is about 5-10%. It depends on the size of the aneurysm, but to a much greater extent on the presence of concomitant cardiovascular pathology. In the absence of a pronounced concomitant pathology of the cardiovascular system, asymptomatically occurring small aneurysms (4-6 cm) should undergo surgical correction. In the presence of severe concomitant diseases, it may be advisable to conservatively lead a patient under the control of repeated ultrasound examinations. The operation should be performed in case of symptoms of the disease or a significant increase in the size of the aneurysm.

The life expectancy of some patients after rupture of an aneurysm is sufficient to perform emergency surgery. They usually act in a state of shock, with severe pain in the abdomen and lower back. With palpation, a tense pulsating formation can be detected. Survival in the performance of an emergency operation under such conditions is about 50%.

Aneurysms of the descending aorta. The second most frequent localization of the aortic aneurysm is its descending section, immediately after the left subclavian artery. These aneurysms are usually spindle-shaped and result from arteriosclerosis. Many patients with aneurysm of the descending aorta also have an aneurysm of the abdominal aorta. The first signs of the disease are detected by chest radiography. In this case, as a rule, clinical symptoms are absent. The diagnosis is confirmed by computer tomography or aortography. Resection of an aneurysm of the thoracic aorta is technically more difficult to perform than resection of an aneurysm of the abdominal aorta. The risk of surgical intervention is largely determined by the concomitant cardiovascular and pulmonary pathology. The surgical intervention to prevent rupture of an aneurysm is indicated in those cases when clinical symptoms of the disease appear, with an aneurysm greater than 10 cm in cross-section, or a rapid increase in its size and in the absence of concomitant cardiovascular diseases making intervention impossible.

Traumatic, false, aneurysms of the descending aorta can occur in patients undergoing aortic rupture. The most common cause of these are aortic ruptures in car accidents. The rupture is usually localized at the level of the arterial ligament. In this case, there are pains in the chest and lower back, similar to the pain associated with aortic dissection. Arterial pressure on the upper limbs is increased, while on the lower ones – is lowered or completely absent. Chest X-ray revealed an increase in the mediastinum. The diagnosis is confirmed by CT or angiography. Traumatic aneurysms occur, as a rule, in young people without concomitant cardiovascular pathology. In these cases, surgical treatment is indicated.

Less often aneurysms of the descending aorta have a saccular form, for example, with syphilis and other infectious diseases (mycotic aneurysms). Sacral aneurysms are the most prone to rupture, and as such should be subjected to surgical treatment.

Aneurysms of the ascending aorta, especially if they are caused by cystic medial necrosis, can cause aortic regurgitation and lead to left ventricular failure. In these circumstances, resection of an aneurysm with replacement of the ascending aorta and aortic valves and reimplantation of the coronary artery is indicated.

The most common symptom of an aneurysm of the ascending aorta is pain in the chest, which patients often describe as a deep unpleasant feeling without clear boundaries. The decision to resect an asymptomatically flowing aneurysm to prevent its rupture depends on its size, the presence and severity of aortic regurgitation, and the concomitant cardiovascular pathology. More than 50% of such patients have additional aortic aneurysms.

Aneurysms of the aortic arch. These aneurysms are less common. However, they are more inclined to cause different symptoms than others, because, by squeezing adjacent structures, they lead to dysphagia, dry cough, coarsening of the voice, dyspnea, or pain. Aneurysms of the aortic arch can be spindle-shaped with arteriosclerosis or saccular – with syphilis or other infections. Operational risk for surgical correction of these aneurysms reaches 40-50%.